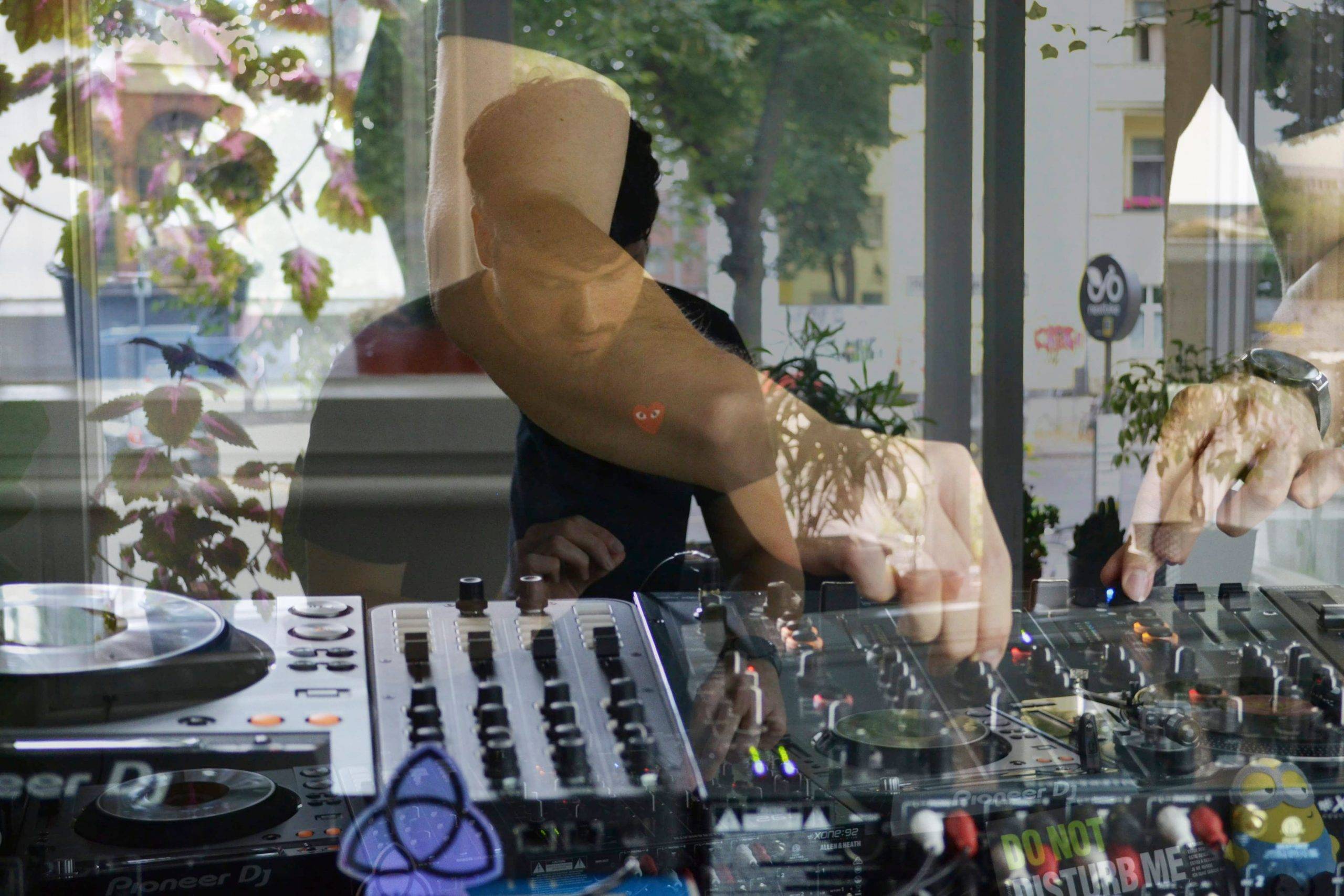 Listen to this 78 minutes minimal house mix by Isaac Elejalde featuring tracks from DJs who have collaborated with our project Intaresu. Find the tracklist below the video.

Recorded and edited by 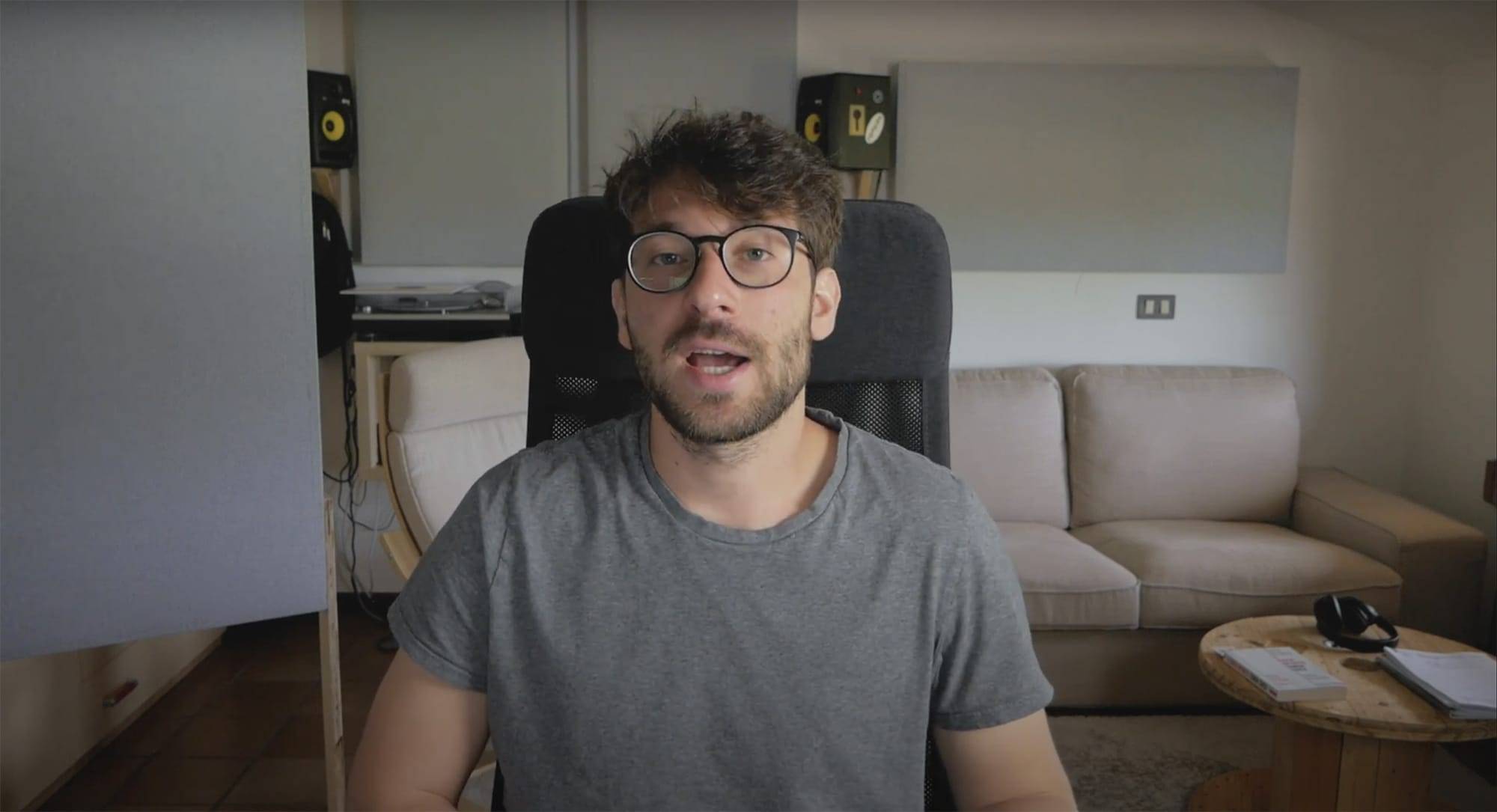 Francesco Tegazzin more known as Distilled Noise an Italian producer born in 1991. He discovered in electronic music a method to freely express his musical taste while maintaining a connection to his old school blues and rock n’ roll roots. He strives to construct his style out of antique samples while keeping his pleasant feelings high.

Distilled Noise launched his YouTube channel a couple of years ago to share his journey into electronic music and recommendations for producers and it was then when he began to appreciate sharing tips and music with others.

A Minimal House jam with Digitakt

Digitakt is one of the hottest sampler right now

Elektron’s Digitakt is a small sampling drum machine. It comes with everything you’ll need to get everyone flowing to the rhythm. A sampling capability, a live-friendly sequencer, dedicated tracks for controlling external MIDI gear, and Overbridge compatibility are all included in this digital and extremely adaptable sound engine.

Distilled Noise employed this machine to show us how he made his first minimal house jam,  how to managed the machine, and the creative process to be able to use it correctly.

Distilled Noise continues to show off his talent

On these days Distilled Noise continues to show us his inventions, evaluations of new equipment, how to utilize samples correctly, inspiration for new sounds, and his procedures to progress as a DJ on his YouTube channel.

Distilled Noise has proven to be a genius in the industry today, and his videos allow us to watch his progress every day.

Resilience Groove, a pioneering and unique ensemble, performed live on a Livestream at Club der Visionaere on May 30th, introducing us to their unique sounds and an extraordinary manner of performing music magically.

Francesco Passantino, Berten De Beukelaer, Francesco Monaco, and Daniele Ricca compose the group Resilience Groove. Together, they’ve come up with a new electronic music formula. Is the combination of man, machine, and plant Earthlings of many ages, backgrounds, and experiences who have come together to celebrate the Groove of Life. They prefer to live a passionate life, a genuine life, together in real life, enjoying amazing moments, thus we play live.

Resilience Groove has demonstrated that passion can influence music; their jams throughout the live stream reflect the progress and rewards of living life to the fullest. Their vision is of a life in which we recover our right to dance, as well as our freedom of speech and assembly.

This ensemble has a unique sound that everyone should experience at least once, which is why we encourage watching their livestream and listening to their music. 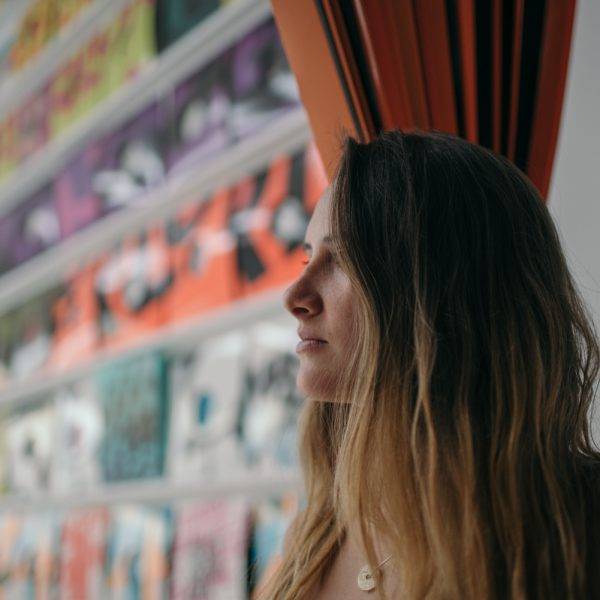 WarmUp.Berlin passing the message on to the next generation

WarmUp.Berlin is a platform created by Isabelle Besse that consists of individuals who have inspired, formed, and changed the electronic music scene. DJs, creators, club owners, producers, and others who have contributed to the revolution and evolution of music are among the guests on the show.

A strong passion for music

Isabelle Besse is the creator and mastermind of WarmUp.Berlin, she’s also the founder of Belisa Booking Agency. Her music career began in 2011 with the Cocoon, where she continued to work with Cocoon Recordings in Frankfurt.  She additionally worked at cosmopop in Mannheim, where she obtained valuable expertise and knowledge in the organization of large festivals including Time Warp, Love Family Park, and Sonus Festival.

“Music is the universal language, but where does it come from and how did it originate?”  This is WarmUp.Berlin’s fundamental idea, which is to explain and include electronic music fans to comprehend and experience the compositions behind the beats we hear every day from a new perspective.

WarmUp.Berlin is divided into two segments. The first half is an interview with the special guest, wherein they discuss their musical experiences, everyday lives, objectives, and the careers they have built over the course of their lives.

Chris Rehberger, the founder, and designer of Vinyl Label Perlon was the show’s first guest. Chris has a great backstory. Starting from Germany, he spent the 1990s in London and Manchester, which influenced his increased interest in various communities and music.

During the interview, Chris discusses his background in design as well as his musical tastes and how they have influenced him over the years. Living in many locations across Europe piqued his curiosity and enthusiasm for music, allowing him to develop a broad range of musical tastes.

Mike Shannon, one of North America’s most well-known techno and house DJs, is the program’s second special guest. Mike is well-known as one of the core protagonists in Canada’s burgeoning electronic music scene, with over 10 years of DJ expertise.

Mike recounts his musical journey from the beginning to the present. Mike’s music choices and knowledge in mixing and generating new songs reveal a distinct side of him.

Around 30 years ago, Gregor Kraemer relocated to Berlin. With his arrival, he changed the city’s musical scene into what it is now, and 20 years ago, he founded Club the Visionäre, a cultural and musical cult place among worldwide musicians and music fans.

Gregor is the third guest on WarmUp Berlin, and he shows us a fresh perspective of how music transforms in clubs. 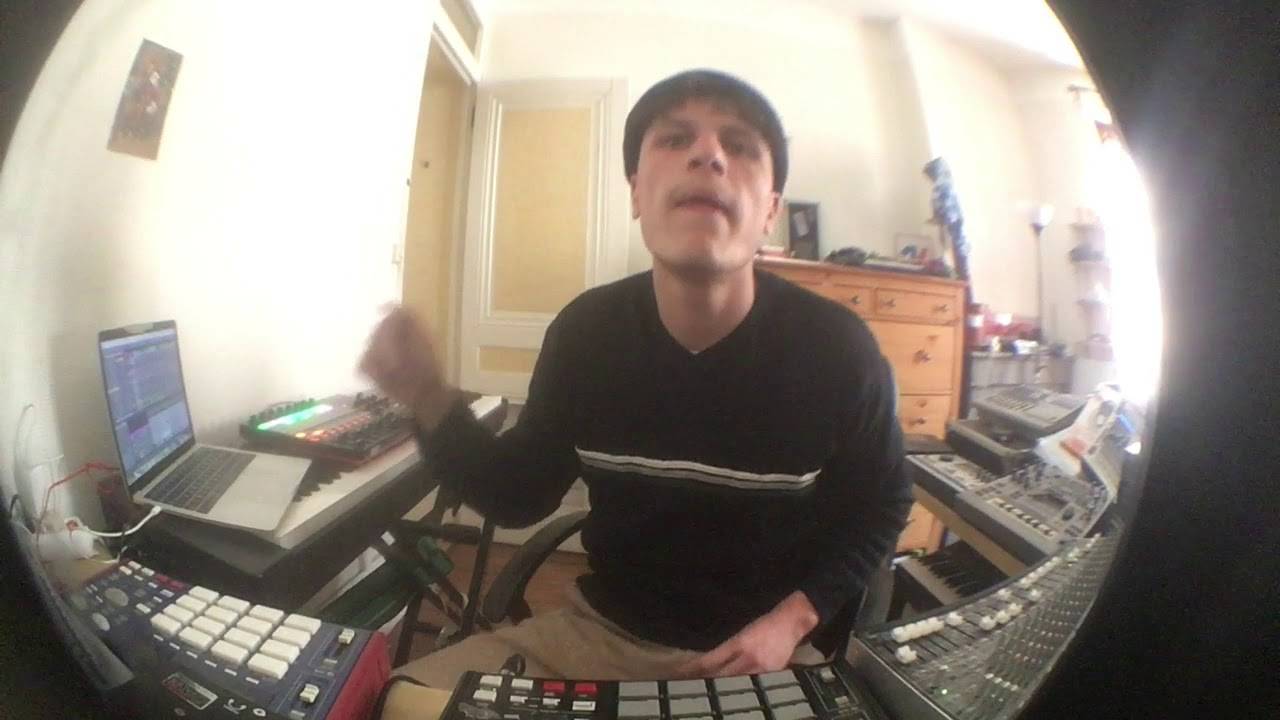 Sweely, a producer from another planet

Sweely is an innovative producer from Nice, France who has been prominent on the electronic music scene since 2016. He is known for being one of the emerging generation’s most innovative and versatile French producers, skillfully traveling between various music genres as minimal, house, and electro; this has a significant impact on his sound identity.

Sweely spends a lot of his time experimenting and learning any musical instrument that comes into his hands, with a particular inclination for groovebox and machine drums as you can see in his videos on his YouTube channel.

Since 2015 he has been uploading videos of his jammings and productions. Hit play to any of his jamming videos and enjoy the magic of his creations with only a few instruments. Sweely started with his recorded jams using an MC 808 and Microbrute as you can see in the following video.

Over time, his talents have improved, and he has been able to include several styles of music into each of his productions. Sweely’s sound is now more inclined to House and Electro sounds and mostly uses the MPC 1000 and Ableton. Depending on the jam he changes drum machines and synthesizers. For example, in the last video he uploaded, he picked an Elektron Machinedrum, and Microkorg.

Sweely, who is now well-known on the scene, has demonstrated that music with a distinct style and years of dedication to one’s love can pay off. Don’t forget to subscribe to Sweely’s channel to get a notification when he uploads a new video. Also, check the links of interest to follow him on your preferred platform. 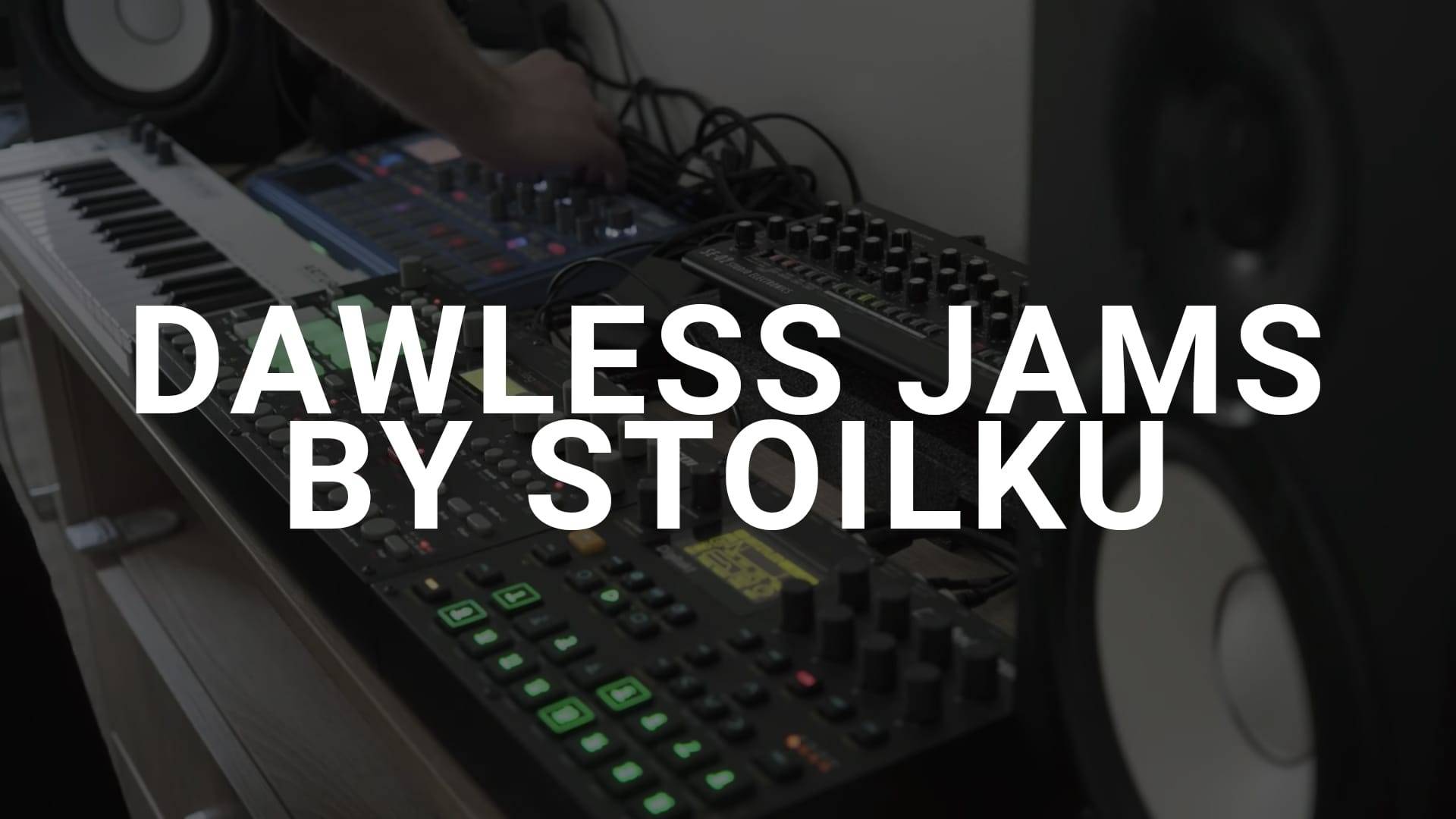 DAWless Jams by Stoilku, the owner of Octophonic Records and Black Magic Groove, are uploaded on his YouTube channel. His music style in these jams goes around Minimal House and Rominimal.

Why would anyone want to go jam without DAW?

Well, if you spend most of your day in front of a computer screen because of your job or studies, the last thing you want to do is get home and find inspiration in the same environment. Also, having to deal with your DAW’s crashes and updates is not fun. Another reason is that living in a nostalgia era, a lot of people want to get back to the basics. On top of that, it is more fun.

In the first two Minimal House jams he used only an Elektron Digitakt, the latest hit from Elektron after the Octatrack and Analog Rytm. Definitely, a most have groovebox for almost everyone who is looking for a new one to add to their studio.

Later on, in his third jam, he went into a more hypnotic style with a groovy melody and ethereal pads. Also, he added to his performance a Roland SE 02, an Elektron Analog Rytm, and a Korg Electribe 2.

Do you want to go jam without DAWs?

Producing music without a Digital Audio Workstation (Softwares like Ableton Live, Logic Pro, FL Studio) is something you will do sooner or later if you are into electronic music. At first, it might be overwhelming to understand new vocabulary like MIDI In/Out, MIDI Thru, Clock, Analog, Digital, Polyphony, of many more words.

But after research, trial and error with your drum machines, synthesizers, sequencers, and grooveboxes, and persistence, you will be part of the club in no time. Come and be part of the Intaresu Community to connect with more like-minded people.

Lastly, if you have DAWless jams that you want to share with us you can leave it in the comment section or contact us clicking here.

Keep an eye on Stoilku